Xerjoff - the combination of art and perfume

DESCRIPTION
Naxos celebrates the deep and sensual heart of Sicily with this opulent perfume. Inspired by tradition, implemented in the modern. With its Mediterranean and passionate character, Naxos transmits a cheerful vitality thanks to its citrus notes. These mix with sweetish flowers and are emphasized by the contrast created by valuable spices. The olfactory traces of a 1000 year old culture of conquerors meet in Naxos. The fragrance starts with classic, light and fruity notes of citrus, combined with exotic notes of cinnamon and a sweetness of vanilla and honey. The heart of white flowers and jasmine is replaced by the masculine notes of tobacco and tonka bean in the base.

XERJOFF
The XERJOFF brand was launched by Sergio Momo with the aim of mixing the most luxurious materials according to traditional craftsmanship in order to create fragrances that perfectly enrich and round off any exclusive lifestyle.

XERJOFF 1861
In 1861, the individual states of the Apennine Peninsula united under the leadership of King Victor Emmanuel II to form a united Italy. The young nation has always been home to poets, saints and seafarers, who shaped Italy's reputation around the world with a special talent for creativity.
The 150th anniversary of this association was a very special event for Italy and XERJOFF honored this with the launch of the XJ 1861 fragrance, which perfectly stages the artistic heritage of XERJOFF's homeland.

There's nothing to say just wow and 10/10 everything is perfect with this scent. And whoever wants to buy so expensive should only buy from Understateman. Because they are simply the best and uncomplicated and always helpful on email very quick response simply 10/10 for Understateman team 👍👍

There's not much to say there. Just beautiful.

A
Anonym
The scent bomb among the niche fragrances

What can I say, just awesome!!! At the beginning fresh then in the sweet direction honey, vanilla compliments are popular people 😀 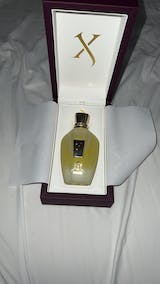 Marketing cookies are used by third parties or publishers to display personalized advertising. They do this by tracking visitors across websites.